Can you imagine yourself in the market, while you are shopping for some goods, crossing your list and buying everything you need for that week?

We can all agree that snack lovers will most certainly during every shopping for their home put chips in their cart.

One of the most well-known brands that stand out in many ways over others is Pringles.

Now, you, as a vegan who is just starting his or her vegan journey, are just wondering, can you still put this snakish delight in your basket and enjoy it’s amazing flavor?

There are so many of them on the market, and you cannot make out your mind, but now you have to pick one that is vegan!

Here you will find the answers you need.

A little bit about the history

Pringles arrived on the global market about fifty years ago, it is not long as some other brands, but many agree that there are certain things that separate this brand from all others.

This brand called its product chips, but it did not appeal to the competition, or to the competent authorities. Specifically, about 42 percent of Pringles ‘chips’ ingredients are potatoes, so the chips cannot be said to be true. That’s why this famous snack, known until then as “potato chips,” has since been renamed “potato crisps” – crispy leaves whose potatoes are only one of the ingredients.

Initially, Pringles chips were made from dehydrated potatoes, which were then fried in deep oil, and its taste would not be as close as it is today. More precisely, many described it as a “taste of cardboard.” It was just the beginning of the researches and changes that will lead to creating one of the best chips in the world.

However, this company that was making them was determined to succeed and did not allow themselves to become demotivated.

In that time, the owner of the brand was Procter & Gamble, did their work, started to explore the market what does it need, and the final result was $ 1 billion brands, and this was in the 90s. The company evolved since then, and of course, like every big company, find its fair share of controversy.

Since 2012 the company that is best known for the cereals production, Kellogg takes over Pringles and it is in their possession still.

When you look at the packaging of these chips, it looks like tennis ball packaging, and it allows all pieces in one package to be stacked neatly on top of each other. In this way, the chips are prevented from breaking, and only crumbs remain at the bottom, which is the case with the classic packaging of such snacks.

Ever wondered why Pringles chips are curved in the middle? The reason is the taste of the spice on the chips. Pringles is produced in 13 flavors and four specialty series. All slips flush with one side only—the other tastes like pure potatoes.

Putting the bulging side on your tongue will simply swallow the spices, and you won’t even know what the chips taste like. Turning it up will follow the shape of your tongue and mouth, and you will hit all the taste buds.

The taste of potatoes and spices will not overlap but will blend, and you will enjoy all that Pringles has to offer. If it wants a lighter taste or less salty, turn the Pringles to the other side to get it. Kellogg’s say they have studied the forms for years and want everyone to enjoy it to the fullest.

Here, we will start investigating Pringles, are the vegan, and to do it, we must look at the ingredients. Like usually, we started from the simplest original taste, the most ordinary one.

In it, the one can of this salty delight, we find, of course, vegetable oil can be sunflower or corn, then potatoes that have been dehydrated (the water has evaporated from them, removed), wheat starch, rice flour, salt, and corn flour.

Then, in the ingredients list, we find emulsifier or E471. In the case of Pringles, these fatty acids are extracted from a plant source but note that this does not have to be the case since it can be derived from an animal source. In the case of these chips, it is derived from plants.

We can find here Maltodextrin that comes from the plants, and it is produced from starch; yeast and yeast powder extract it is vegan-friendly (fungi), and in the end color annatto that is reddish-orange and it comes from the seeds of the achiote tree.

In the first stage of production, ingredients such as rice, wheat, corn, and potato flakes are mixed to form dough that is later molded into a well-known mold.

Then, they end up in oil and then on speed drying. In the last phase, before packing, the chips are sprayed with various flavor enhancers.

Having said all of this, there is no doubt that Pringles are vegan, there is no one element that will suggest otherwise. Of course, there are so many different flavors, that not all of them can be vegan, but some are.

Truly, their full taste and perfect shape make them among the top five favorite snacks in the world, but their vegan status and health status is something else.

As in so many other snacks, it all depends on what kind of Pringles you take, some of them are suitable for vegans, others not.

Also, it depends on the country you live in, and there are different tastes in different countries.

Those vegans who want to stay healthy would avoid them for this reason, chips are not healthy, it is a salty and delicious snack, not a meal, and it should not be something that you consume on a daily basis, your kids especially.

Those who cannot resist the can of this salty potato snack should know that there are flavoring that is suitable for vegans.

Pringles that you can consume when you are vegan are – Original, Paprika, Sweet Chili, Smokey Bacon Flavor, and Texas BBQ Sauce. Do not be surprised how Bacon is vegan here, and it is because the manufacturer uses yeast and some other flavors, like smoked salt, to reach the bacon taste.

The ones that you cannot eat because they include some dairy products are, for example, Salt and Vinegar Pringles. In this group, we exclude these kinds because they are not vegan – Steak, Sour Cream and Onion, Prawn Cocktail, Cheesy Cheese, Roasted Chicken, and Herbs, Cheese, and Onion, Hot and Spicy.

If you are a fan of Pringles Chips, then we will mention some other products that you may encounter but should avoid since they are not vegan. They are Pringles Rice -none of the flavorings that you can find are vegan, not Chicken Masala or Hoisin Sauce.

When it comes to Pringles Tortilla, they are also not vegan, except for the Original kind, but Nacho Cheese, Spicy Chili; Sour Cream Tortilla Chips are not suitable for vegans. Stay away from them, and they have dairy products inside.

One more thing must be said here -take good care of the dips you are taking with your Pringles; they can be the source of something that you can consume on your vegan diet, instead make your own vegan and healthy dip.

The easiest way is to blend some of your favorite vegetables or use store-bought hummus, which is extremely healthy.

Speaking of healthy, you know that if something is vegan does not mean that it is good for your health.

The company that produces Pringles often faces accusations that this product could be damaging to health.

In addition to deep-frying (this is common to all chips, not just this kind); some of the most harmful ingredients are not intentionally added to the production process but are the result of heat treatment of potatoes at high temperatures.

This did not prevent Pringles from becoming and remaining the world’s leading producer of chips – people love to buy Pringles, with plenty of flavors to choose from, their perfect look and taste, and that packaging that does not let them stale. And that one seemingly small but actually crucial difference makes Pringles a favorite around the world.

The key to the damage lies in acrylamide, a dangerous carcinogenic substance is commonly known to cause cancer in animals, and elevated doses of acrylamide found in chips are toxic to the nervous system of humans and animals.

The formation of this substance occurs during the preparation of foods that have been subjected to heat treatment by baking and roasting. Increasingly occurs with chips, because after baking at high temperature, they dry out. All foods processed at temperatures above 100 degrees C contain this carcinogenic substance.

Now, this is not an issue that is connected slowly to the Pringles; it can cause a problem with almost any chips that you can find on the market, so be careful what you eat and what you give your kids.

Also, like in all salty snacks, there is an incredible amount of salt that, in large quantities, cannot be healthy. It can lead to cardiovascular problems, bloat stock, kidney failure, and cognitive difficulties; in the long run, it can cause problems with bones, it weakens them.

So, in case, if you are vegan, you can enjoy certain types of Pringles, (look in the list above), just do not try to do it all the time, occasionally it is ok.

In this sense, be daring and make your own potato chips, perhaps made in the oven, with the small amount or no oil at all. You can make some healthy dip, made of vegetables that are blended together, like a salsa.

If we all confess to eating snacks, the world would be a more honest place. Pringles, with his perfect, lavish slips, erected a monument to that delight.

It was developed by Proctor & Gamble in 1967 and was sold to Kellogg’s in 2012, and now you can find them in almost all countries in the world, each and every one of them has its unique twist on chips.

At Pringles, they took care of everything from the unique packaging to the sound of chips in the tube and enough crumbs to eat them all, even from the couch.

There’s no need to talk about the multifunctionality of the empty Pringles box – there is an entire movement and numerous clips and tutorials online, how can you use a leftover box from Pringles and make something useful with it. Also, there are numerous recipes of another usage of this chips, perhaps blended and made into frying powder.

We have pointed out that vegans can consume it, some kinds not all of them, and do not be lazy to look at the list we gave you, or better the ingredient label to find out because sometimes it is tricky (the ones with “bacon” are vegan, but the ones with Salt and Vinegar are not).

In any case, we understand that it is often hard to resist to this salty delight, and it is ok to consume it occasionally, but you, as all of us know, that eating anything that you made in your kitchen is better than prepackaged goods.

Take a good look online, hundreds of recipes on how to make a vegan, and a healthy version of your favorite snack. 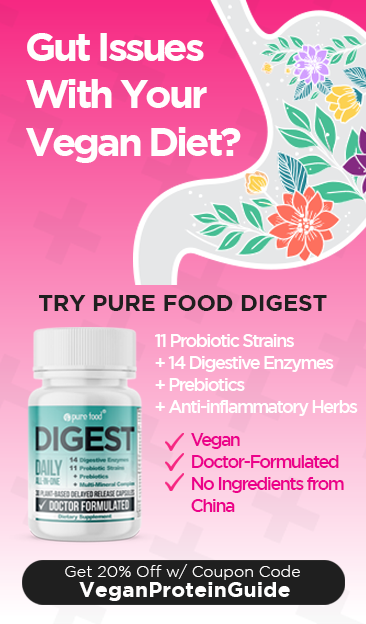 “Vegan Protein Guide is a participant in the Amazon Services LLC Associates Program, an affiliate advertising program designed to provide a means for us to earn fees by linking to Amazon.com and affiliated sites.” Click here to read our full disclosure.